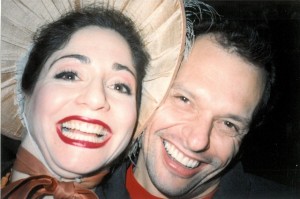 My interview with good friend Jimmy Horvath, one of the fabulous dressers for The Radio City Christmas Spectacular.  Jim is an Emmy Award-winning choreographer and director, a former Broadway dancer, a writer and an AMAZING 3rd Level Reiki Master and Massage Therapist.

When I was dancing at RadioCity, not only did I hang out and have many MANY laughs with Jimmy, but when injured, I never went to a doctor or PT, only Jimmy, and I’d dance that night!   To this day, I go to him for healing and for laughs.  And on this day, I’m asking him about the current Rockettes.

1. Jen:  I remember zipping up a piece of my butt and howling during a quick change into the Wooden Soldier pants off Stage Right.

Costume Mishap What is the quickest costume change during the 2013 Christmas Show?  Any funny mishaps?

Jimmy:  For me, this year I dress Santa, and I don’t have “quick changes”.  I know the Rockettes have a very fast turnaround out of “12 Days” into “Wooden Soldiers”.  Any funny mishaps, you ask?  Not yet!  We are still in rehearsals for “The Times Square Fireworks and Camels.”

Jen:  Sounds like a recipe for a lot of pooper scoopers!!

2. Jen:  It was all glam being the Dancing Drummer Bear in my day.

Do the Rockettes still have to put on those big bear heads for the Nutcracker scene?

Jimmy:  No, they don’t–no Rockettes in the Nutcracker for 2013.  Male and Female ensemble dancers and the female ice skater along with the “Baby Bears”(Little People) fill the dancing bear cast under the giant Christmas tree.

3. Jen:  I remember being the only real Jew in the Nativity scene.

The Gold Camel I followed in Nativity (PU!) Do the Rockettes still have to walk behind those stinky camels these days?

Jimmy:  On the way to Bethlehem—Yes!  Everyone follows the camels.  Molly  and Ted are the two single humped camels out of the three that have been with the show for over nine years.  By the way, from the new number “Snow” into “Nativity” is also a very fast wardrobe change for everyone, including the Rockettes, Dance Ensemble and the ice skaters.

4. Jen:  We had to get ready for that long lost routine, Carols of the Bells—remember that sucker?–in the bowels of Radio City (the basement).

Do the Rockettes still line up there and have that ever painted those walls???

Jimmy: I loved “Carol of the Bells”!!  The walls have been painted several times.  And now, there’s a second stage deck built on top of the real stage.  This was done to add three small turntables, three trap doors (for the “Here Comes Santa Claus” number) and five different elevators for the Video Game number for the Rockettes to enter during the number as the game moves forward. So there’s a complete second stage under the stage that everyone is dancing on!!

Do the Rockettes do all the shows and how do they survive?   (I cried and took pills, but that was just me.)

Jimmy:  Now, the entire company is double cast.  One cast will top out doing 16 shows a week, so the full performance schedule is 32—Split.  But there is a medical staff in the building at all times, as well as a full Physical Therapy staff on the 9th Floor.  So, no one has to do all the shows, except Santa!  Wow!  What a Christmas spirit…

Find out more about Jimmy at www.downtimestageleft.net