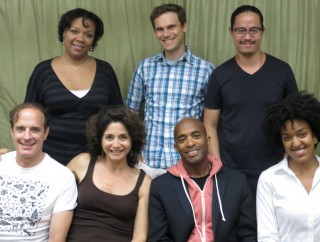 A COMEDIC SHORT FILM WRITTEN BY AND STARRING ME!

CUT TO:  September, 2013.  I’m working out this friend of a friend, Pam Gordy, (yes, I also teach exercise and dance… omg) and her life is hilarious!   She becomes my muse.  After each workout, I take copious notes and then by the end of the month, I have a screenplay, MOTHER OF THE WEEK, combining her life with mine.  Here’s the synopsis:

STACEY, a 41-year-old career woman has it all together – with the invaluable help of her children’s perfect (inside and out) nanny, MARISA, whom the three kids love, and Stacey’s husband TIM doesn’t mind looking at either.  When Marisa takes a week vacation, Stacey is happy to prove herself and reassert her own role as Mom and sexy wife.  Easier said than done – Stacey finds that without Marisa’s help, taking care of family and work is a little more than she can handle.

I call an old writer friend of mine, Fred Stroppel, whom I did sketch comedy with (Third Rail Comedy) back in the day.  He focuses and fine tunes the script (and adds a few more expletives).  Now, it makes sense, and we’ve got a great story!!

I call a director whom I love and worked with before, Kareem Attallah, but after getting his budget (blah, blah, blah, 5 million steps later…) it doesn’t work out.

WIDE SHOT:  Me running around interviewing directors and asking everyone I know who’s made a film, “How the eff do you make a film??”