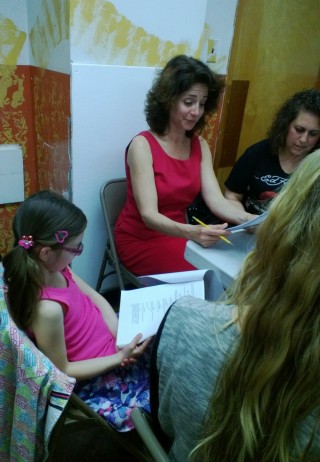 Okay, so I swear way too much and even around my own kids (they know not to curse outside of the house, unlike me.)   And because in reality all the mothers I hang out also drop the F Bomb (and S Word and sometimes uglier) and the other writer Fred Stroppel knows me well, the screenplay was riddled with them.

The Table Read is where the newly formed cast of any film gets together with the production team to hear the script.  It was the most exciting day so far in my MOTHER OF THE WEEK journey!   I LOVE the cast and hearing the script out loud with each of them embodying the characters I imagined in my head was exhilarating.  I hadn’t thought much about the swearing because clearly the cast members and more importantly, Kim, the mother of our two little ones, had read the screenplay and were on board for the shoot.

Check out Randi Kaplan’s t-shirt she wore to the audition, knowing I’d love it. Randi rivals me in my potty mouth.

But then when we finally settle down and start to read the first scene of dialogue, Randi is a bit shy with her opening line, “You’re the only woman I know who could f*@# herself up doing yoga.”  The f*@# was garbled.  All of the sudden, I’m aware of the 3 year old and the 8 year old in the room.  If Randi can’t say it, then how can I?  We get through the screenplay, but each F Bomb was lacking in the gusto which makes it so satisfying to spew.

We took out the gratuitous bad language, but don’t worry, I won’t let the film go PG because that would certainly not be relatable to all the busy truck driver speaking working Moms out there in the real world.  This one’s for you.