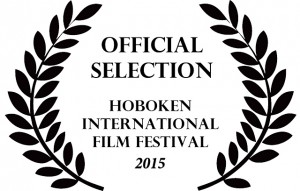 MOTHER OF THE WEEK PREMIERES AT THE HOBOKEN INTERNATIONAL FILM FESTIVAL

Last year around this time, we were gearing up to start shooting MOTHER OF THE WEEK, and in about one week from NOW it will PREMIERE at the prestigious Hoboken International Film Festival!!!

After writing, collaborating with the amazing co-writer, Fred Stroppel, finding a director, director of photography and crew, casting, securing the locations, finalizing the SAG paperwork, there were still a million and one details that I hadn’t a clue would come up! (This is my first film to co-write, cast, co-produce and star in…omg). Thankfully, my friend, Executive Producer and co-star, Mark Lobene, was wholeheartedly on board, not only financing, but calmly fielding rockets I launched at him, giving me great business advice, and steering our ship into the harbor (so many stupid metaphors, sorry.. but I’m too excited to be more articulate!), including hiring my best friend and Co-Producer, 2 time Emmy Award-winning Producer and Jewelry Designer, Adrienne Paxton.

We shot the film over four weekends at a total of six locations (three of those made up the one house location where our characters lived) working with a cast and crew of about fifty people.

I’m thrilled we got it done and even more thrilled we got into a festival! And…get this… they listed it as a “TV Pilot”, which is exactly what I had in mind when I first conceived of the idea of a story about a working Mom who tries to do it all and be everything to everyone (please see my private life for more material…)

Reserve your tix for the Premiere of MOTHER OF THE WEEK in the Hoboken International Film Festival on May 31 @ 4pm: www.motheroftheweek.com/festivals I’ll be there to give you a hug, a high five, and a big fat smile!