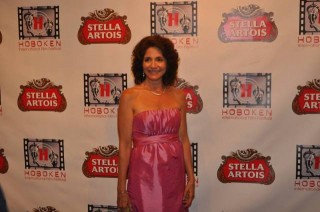 So, “Mother of the Week” is the FIRST screenplay I’ve ever written and not only did it get made (many don’t unfortunately), but then it got into the FIRST film festival we entered into, and we got NOMINATED for a Best of Festival Audience Award.

I remember the day I decided to write it.  I just sat down and did it.  I had an idea and executed it.  Sounds simple because it is, when you go one step at a time.   That wasn’t the final script, but the ideas were out. The hardest part is taking the FIRST step.

I’m not saying that it wasn’t a bumpy road riddled with pot holes and u-turns (the freaking million details of film production–in the thick of it, I blurted, “I’ll never do this, again!” and upon hearing me, the more experienced film makers on my team just burst out laughing, having been there themselves many times over.)  And I’m not saying I knew it would be successful or people would enjoy it.  I just knew I had to write it.   And then I knew I had to find some amazing folks to help me make it.  One step at a time.  Although I had my goals (which are ever changing still), I didn’t look at the prize, one prize.  I kept at it:  creating details and crossing them off my to-do list.    It always seemed to me that here was an incredible opportunity, and I was going to follow it through.  I was never alone, but surrounded by incredibly talented, motivated, knowledgeable, supportive, engaging, capable and kind professionals.

I will take credit here, though:   it was that afternoon when I sat down to write the story which made it all possible.

It’s been a dream come true, so far, each step of the way.  I’m not rich or famous, but I made a film that gave a bunch of folks some laughs—a way to laugh at their own liv

es, too.  At its FIRST screening in the Hoboken International Film Festival, I listened for those laughs.  As I got each one, I giggled “phew!”