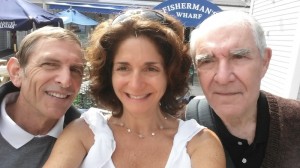 ANOTHER GREAT WEEKEND WITH CHEEVER & SKLAR (THE FAMOUS COMEDY DUO 🙂

I had a fantastic time mixing it up with top audio book narrators, producers, directors, publishers and some best selling authors at Audiofile Magazine’s annual Lobsterbake in Booth Bay Harbor, Maine.   Ben Cheever (Best Selling author of “The Plagiarist”, “The Letters of John Cheever”, “Selling Ben Cheever” and more) and Alan Sklar (Earphone Award-winning audiobook narrator of over 200 books and actor) were my travel buddies, again this year.  The 9 hour drive feels like 10 minutes with those two.

And here we are having more dinner and drinks at the Fisherman’s Wharf with narrators Barry Abrams (also a producer at ESPN) and the hilarious Norman Dietz (named one of the “Best Voices of the Century” and author of “Nailing It”).

Who’s missing in the photo is Alison Larkin, my long lost great friend and Best Selling Author of “The English American”.  What a thrill to reconnect with Alison!  We started out in stand up comedy years ago, both wrote and performed solo shows about our lives back then, and now we both have 2 kids and are doing “mommy material”.  We were glued to each other and talking so much I didn’t get any photos!!

Each year our gracious host and Editor of Audiofile Magazine, Robin Whitten, invites the narrators to perform in a tent after lobsters and before homemade pie (and during cocktails which flow throughout).  Here I am getting some laughs and below is the QUEEN OF AUDIOBOOKS (did I crown her that???) my friend the incomparable Barbara Rosenblat (8 time Audie Award winner, “Golden Voice”, “Voice of the Century”, over 40 time Earphone Award winner, Broadway diva, and appeared on Netflix’ “Orange is the New Black”)